Read about Liam’s journey through Crohn’s disease, emergency ileostomy surgery, and post-surgery complications, and how he emerged into a better future. 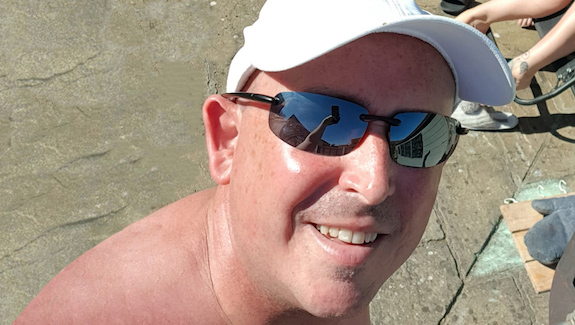 Read about how Liam learned to love his new life with an ostomy.

After a 25-year struggle with Crohn’s Disease, Liam Manning had no option but to have emergency ileostomy surgery. A series of severe flare-ups and life-threatening complications culminated in a protracted hospital visit that would see 90% of his bowel removed.

Liam describes this period as “the darkest moment of my life.” Post-surgery, his mental health quickly deteriorated as he battled sepsis, depression, and the prospect of life as an inactive father. Yet, little did he know that his surgery had quietly laid the basis for a brighter future.

Here, Liam describes in his own words what it was like to deal with an intense period of mental lassitude – explaining how he grew, over time, to feel more comfortable in his skin.

I’ve had Crohn’s Disease for roughly 27 years now. During this time, I’ve had to learn to live with constant fatigue, crippling abdominal pain, numerous surgical procedures, and pretty much every prescriptible drug you can imagine. To say it’s been difficult would be an understatement.

My health took a turn for the worst at the age of 34; at this point I was taking a combination of biological drugs (that suppressed my immune system) and a heavy dose of steroids. Naturally, I knew I was quickly running out of treatment options and that a stoma was looking likely. I just didn’t realise that it was going to happen so soon.

Perhaps the toughest mental challenge for me during this period was dealing with workmates who perceived me as lazy, and who thought that I was taking time away from my job for no reason. These experiences have taught me that you should never push yourself to the breaking point for fear of how others may perceive you; you can’t change their opinion, so you should focus energy on yourself.

“What I thought was going to be a routine trip to the hospital, turned out to be one of the most traumatic experiences of my life.”

In August 2017, my body had finally given up. What I thought was going to be a routine trip to the hospital, turned out to be one of the most traumatic experiences of my life. My body had rejected my bowel, and it just wouldn’t wake up. In turn, the surgical team told me that the only option was to remove 90% of my large intestine and have a permanent ileostomy.

As you might imagine, this news tipped my mental state over the edge. I fell apart, crying and worried about what was going to happen. What would my future hold? And why me? I was terrified and fragile. I was also scared that I wasn’t asking the right questions – and, what was even more frustrating, I didn’t know what these questions were! Of course, I always knew that this might occur one day, but I didn’t think it was going to happen to me so quickly. Not right now, at least.

In an ideal world, I would have been prepared for surgery and had plenty of time to withdraw from all the biological drugs I was taking. But the situation was too severe not to act immediately, and I was left with an already weak body trying to recover from a serious surgery.

The darkest moment of my life

I was in hospital for 12 weeks. For the majority of this time, I couldn’t move from my bed; I was continually fighting sepsis and bacterial infections while unable to take in any food or drink. To make matters worse, my surgical wound broke down.

This was the darkest moment of my life, both physically and mentally. Weak and unwell, I’d continuously cry while trying to come to terms with that was happening to me. At my lowest point, I would acquiesce at the prospect of tomorrow never arriving. Not just for me, but for my close family too. I couldn’t imagine what I was putting them through. I regularly pondered being a disabled person, laid inert in a bed for the rest of my life, merely being a burden to my wife and children. All this was too much to take in.

I received amazing support from my family during those days in hospital. My wife, Robyn, was juggling her life, a job, and three children at the same time as caring for me, while my sister, Zoe, would spend many a night sleeping in a hard, leather hospital chair. My parents also showed me the most incredible encouragement. With their help, I started to believe in my future. I can say with retrospect that if it wasn’t for the love and guidance of my family, I think the outcome would have been very different.

“I was so unwell and mentally exhausted that I seemed to turn everything into a negative.”

During this period, I also took the hard decision not to let my 9-year-old daughter see me in hospital. It was one of the hardest decisions I’ve ever made, and it severely impaired my mental health. My wife would bring my nine-week-old boy into the hospital, which certainly helped to lift me, but it would also cement my concerns that maybe I would be this ill forever – unable to be the supportive, fun, active dad that I always dreamed of being. I was so unwell and mentally exhausted that I seemed to turn everything into a negative.

It’s worth saying at this point that I was wrong. My thoughts always needlessly wandered into dark places without the positives of what life could be like. Today, I am the active and energetic father I wanted to be. I didn’t know this at the time, but my life was quietly building a solid foundation for a much brighter future.

After several months of torment, I had traded my flip flops for a woolly hat (it was now winter!), and left hospital with a new ostomy pouch.

Living with my stoma

My new life with a stoma started slow due to all my surgical and health complications. The crucial part for me was first getting on the road to recovery, so I was in the right state to understand my new body. I was also battling with bouts of depression. These thoughts went on for many months after surgery due to the time it was taking for my body to recover, causing me to imagine life as a severely disabled person. It’s fair to say that these negative thoughts were often misguided, and I always imagined the worst.

Surprisingly, I had quite a practical approach to managing my new bag. I was already heavily reliant on many of my friends, family, and nurses for daily tasks, so I didn’t want my stoma to be another thing someone else had to look after. I also knew that my stoma was for life, so it was up to me to take control of it.

For anyone who is starting their ostomy journey, I’d say don’t be too hard on yourself. It’s okay to be angry, upset, or embarrassed. These tough new life lessons may make you hate your stoma, but they’ll give you the tools to make tomorrow more manageable. Living with an ostomy is very much like learning to ride a bike; you have to stumble a bit and make a few mistakes to go forward.

What we don’t understand often creates false scenarios in our minds. To use a gaming analogy, we like to develop new ‘levels’ that are full of unknowns and fears, but these don’t exist in the real world. These thoughts go on to shape our reality, thus causing unnecessary depression and mental struggles. It’s not until we play the game for real that we realise it’s not all endless negativity. I didn’t realise this until after my surgery.

“My stoma doesn’t stop me from doing anything; in fact, I’m able to do more physically and mentally demanding activities than my previous life afforded me.”

Three years on and time has been a fantastic healer. I feel like every day is creating a new, healthier me – something I never imagined. My stoma doesn’t stop me from doing anything; in fact, I’m able to do more physically and mentally demanding activities than my previous life afforded me. I don’t even notice I have a stoma sometimes, that’s how comfortable I’ve become. That’s not to say my wellbeing is always positive; the past is still quite raw, and my experiences have made me cautious. But, if I’m honest, I’m excited about what the future holds for me.

Through the knowledge I have gained, I would urge people experiencing similar difficulties to consider the benefits of having a stoma. Create positive goals for your future and then focus on today, right now. Don’t worry about the steps in-between – these are often spontaneous and unplannable. Whether your stoma is permanent or temporary, it’s there to set you up for success. My advice is to embrace your new you, and, more than anything, learn to love yourself. I have.

Hobbies, routines, experiences — your story can inspire others.

Unfortunately your browser is not supported by our video player. Please update your browser to view the videos on this site.

You are now leaving the Dansac website and are going to a website that is not operated by us. Dansac is not responsible for the content on or availability of linked sites. Please be aware that linked sites may have different security or privacy policies.