My Trauma and a Difficult Start

Mother, triathlete, and outdoor swimmer Gill Castle shares her ostomy surgery experiences and explains how coping strategies can have a positive impact on life with a stoma. 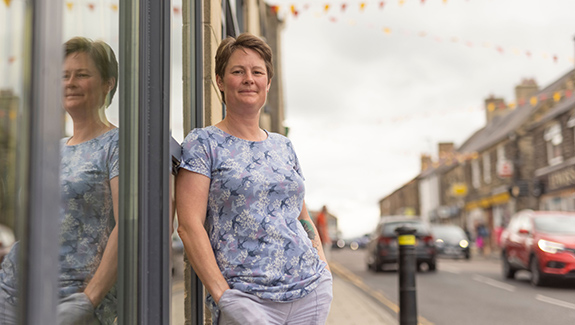 Learn about what Gill experienced in the days and weeks after stoma surgery.

After a traumatic childbirth, I was told that I would need an emergency colostomy – but I didn’t really understand what that meant. A stoma nurse showed me an ostomy bag and she drew a mark on my abdomen for where the stoma would go. It didn’t really make much sense to me, and everything was moving so quickly that I didn’t have time to formulate any questions. I wish now that I had asked more questions about how my daily life would change and asked for advice on recovering from surgery.

Because I had been in pain after the birth, I was relieved on the day of my surgery. I felt that it was the start of my pathway to recovery. But as the lift doors closed to the hospital corridor, I saw my shattered mum break down in tears as she walked away – and I realised that the surgery was something pretty major.

Waking up after stoma surgery

After the operation, I woke up in pain in the hushed recovery room. My abdomen felt bloated and I could see the beige stoma bag. My medical team took me back to the colorectal ward and gave me some strong pain killers, and I soon fell asleep. I woke up to a feeling of warmth all over my stomach, and the stench of poo hit me before I had even opened my eyes.

I looked under the sheets and realised that there was poo leaking out from underneath the bag and dripping all over my stomach, the bedsheets, and my nightgown. I was absolutely horrified and, in a panic, pressed the emergency buzzer for the nurse. She immediately began to clean me up, swiftly but carefully changing my stoma bag and my bed sheets. I lay crimson-faced and mortified in the bed. It was the first sign that my life really had changed, and that life with a stoma wasn’t going to be as straightforward as I’d hoped.

Strategies for coping with a stoma

As the weeks and months progressed, I adjusted to living with my stoma. I learned which foods to avoid and which I could tolerate. I learned to leave time after eating and before leaving the house to give my stoma a chance to activate, which decreased the chance of pancaking when I was away from home. I organised my handbag so that I could fit in emergency supplies of spare bags, adhesive remover, wipes, and disposal bags. I also kept my Radar key and emergency toilet card in my purse. My wardrobe changed as I began wearing high-waisted tights and leggings, which don’t pull down the top of the bag and aren’t so tight that they squash it. I took 15 pairs of jeans to the charity shop!

One thing that has taken me a long time to adjust to is having to poo in a public toilet – something I wouldn’t have done previously. It took many years for me to become accustomed to the noise my stoma can make, without warning and sometimes loudly. I learned to press my hand on my stoma so that the noise was muffled. Whenever I went outside my house, I had to think about toilet facilities and how I could change my bag or clothes if I needed to. Driving the car with a full bag was stressful, as I couldn't do an emergency stop properly and I also couldn't concentrate. My mind was on how to find a nearby toilet before the bag burst off, and what would I do with the baby if there were no baby changing facilities in the disabled toilets?

Sink or swim – my post-traumatic growth

Although I had started to adjust to my stoma in practical terms, it took me longer to accept that it would always be part of my life. It was meant to be fitted temporarily for 12 weeks, to allow my injuries to heal. Then it would be reversed, and I would carry on with my life just as I had before. Unfortunately, my injuries were too severe and my doctors told me that my stoma would be permanent.

I had mixed feelings when I heard this news. After many months of emotional torment, stuck in limbo, not knowing whether my injuries would be repairable or not, ultimately I felt relief. By this point, I had learned to manage my stoma better, and I knew that if it was reversed, I risked incontinence. Once the final decision was made, I decided that I would not be bitter about what had happened. I couldn’t do anything about it, so if I wasted energy on being angry then the rest of my life would be overshadowed by negativity.

That was the start of my new life with an ostomy. I had to either sink or swim…and I chose to swim! So if you’re worried about whether you can cope with your stoma and live a full, active life – the answer is yes you can!

People who provided testimonials received compensation from Hollister Incorporated. The testimonials, statements, and opinions presented are applicable to the people depicted. These testimonials are representative of their experience, but the exact results and experience will be unique and individual to each person.

Unfortunately your browser is not supported by our video player. Please update your browser to view the videos on this site.

You are now leaving the Dansac website and are going to a website that is not operated by us. Dansac is not responsible for the content on or availability of linked sites. Please be aware that linked sites may have different security or privacy policies.